Which types of widgets should you choose?

The way you display your data is almost as important as the data itself. Choosing the right widget design is, therefore, crucial.

Whether you’ve reached your sales goal, improved the session duration on your website, or you want to show your visitors’ age distribution, we’ve got the ideal widget for you!

There are two types of widgets: those with and those without a dimension.

Widgets without dimensions display the whole data. Among the different functions offered by these widgets, you can follow the evolution of your data over time, see if you’ve achieved your goals, and make a bold statement with the raw data taking all the place!

As its name indicates, the trend widget is used to show the evolution of quantitative values over time. One axis displays the categories, while the other shows the value scale. This widget is at its best use when you want to show an overall evolution rather than just numbers.

It’s also possible to add more than one metric to the graph if you want to. You want to make sure the values are in a similar range though; if there’s a big quantitative difference between the two metric values, the bars won’t be balanced and it will be difficult to get a clear and quick overview.

The gauge widget is all about showing your goals! We have an entire article on this widget explaining how to set and read it! It’s an efficient way to quickly see how you’re performing in comparison to your goal! 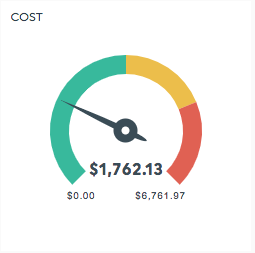 As its name says, this widget shows a simple number. You get the raw data, meaning, the KPI without anything else. Use this widget to highlight your exact performance, such as the number of sessions, profits, expenses, and so on. 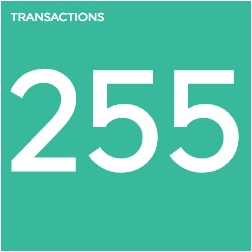 If you can’t decide between a trend widget and a simple number, you can choose the historic widget. It’s basically the fusion of the two. It shows the evolution of your data over a defined period of time without the scale, but it also displays the raw data for the current period. At the bottom of the widget, you’ll find a comparison to the previous period as well as to the same period in the previous year. Now that’s a widget that shows everything!

Widgets with a dimension are used to display the distribution of one or more metrics among categories. There are four of these types of widget.

The pie widget shows proportions within a whole. This “whole” is actually your dimension. This chart works best for a quick view of proportional distribution for a finite set of groups, such as age groups, conversion goals, or channels. If your dimension has a lot of or an infinite amount of groups, the pie chart will only display a sampling of these, so some pieces of information won’t make it onto the pie.

In the Edit blade, under the section Data display, you have the possibility to add pieces of information to your pie chart, such as the percentage or absolute values. There’s even a section where you can combine the out-of-range data as “Others”. Selecting this option might change the proportions of your chart though, and here’s why: if your dimension contains many categories, groups with smaller values won’t appear in the pie because their proportions are too small. By combining these smaller groups together, you’ll create a new one with a greater value, so the proportion might change within the pie.

In the Edit blade, you have the choice to display the data as a percentage or absolute values.

If you show your data as a percentage, the bars in the graph will all have the same height (100%!) and you’ll see the proportion of each group within the bar. It’s similar to comparing pie charts, each bar acting like an individual pie chart.

If you choose to display your data as absolute values, the height of each bar will vary and the graph will be similar to a trend graph. You’ll see the fluctuation of the data and how the groups vary within the bars.

Here’s an example of two stacked column widgets. They both show the same data, but one displays it as a percentage and the other one as absolute values.

Here it is as percentages:

And here, as absolute values:

If every digit counts in the data you want to display, the list widget is your best option. The list will show your exact numbers without rounding. But don’t think you can only create a plain list though (although you can if you want to)! In the Edit blade, you can customize your list with many options: you can add a graph, show both percentages and absolute values, show the fluctuations compared to a past period, and more. Take a look at the Visual and Data Display sections of the Edit blade to make your list widget look the way you want it to!

If you can’t get enough of metrics, the multi-column list is the widget you need! As with the list widget, you’ll have the exact numbers, but in this widget, you’ll have them for multiple metrics! It means you can display all the information you need for a specific dimension. Please note that not all metrics can be used with a dimension, so make sure you choose metrics that work with your chosen dimension!

You can also add a comparison to a previous period as a percentage or with absolute values. Head to the Edit blade to see all your options!

This is also a great widget if the dimension you choose has a large number of categories because you can expand the widget and show more categories!

Now that you know all the types of widgets that are at your fingertips, you can pick the best option for your needs! Don’t forget to open the Edit blade to see all the different options! Play around and make this widget your own!